Most common signs of DUI 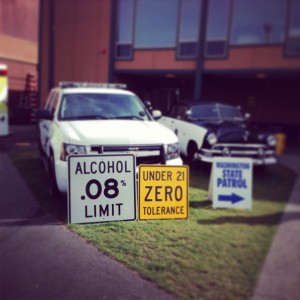 Washington State Patrol and Local King County Police will be out looking for DUI suspects over Memorial Day weekend. I thought this would be an excellent opportunity to break down the five most common reasons Washington DUI cops claim they believe someone has driven under the influence in Washington State.
Bad driving
The first thing an officer notices when patrolling for WA Dui is the driving pattern.  This is phase one in the officer’s training: Vehicle in Motion.  The officer or Trooper will look for a moving traffic violation; equipment violation; an expired tab and so on… Furthermore, NHTSA has developed 24 driving cues which police may detect nighttime impaired driving. According to NHTSA the DUI cues were developed from a list of more than 100 driving cues that been found to predict Breath Alcohol content (BAC) of 0.08 percent or greater.  The 24 cues are as follows: Weaving, Weaving lane lines, Straddling a lane line, swerving, turning with wide radius, drifting, almost striking object or vehicle,  stopping problems, accelerating or decelerating rapidly, varying speed, slow speed (10 mph and under), driving in opposing lanes or wrong way on one-way street, slow response to traffic signals, slow or failure to respond to officer’s signals, Stopping in lane for apparent reason, driving without headlights at night, failure to signal or signal inconsistent with action, following too closely, improper or unsafe lane change, illegal or improper turn, driving on other than designated roadway, stopping inappropriately in response to officer, inappropriate or unusual behavior, and appearing to be impaired.
The Washington Trooper or officer will use these cues to justify the stop of the vehicle. However, I Washington state it may be a defense to DUI if the officer stopped you for a single lane violation. It is also very obvious that any one of these cues can be caused by something other than driving drunk.  The same cues may be seen if the driver is eating, texting, playing with the radio or any other distraction. Also, it is important to note that speeding is not one of the cues.
Red, watery and/or blood shot eyes
This is usually reported as part of the probable to arrest for Washington DUI in Phase 2 of the officer’s training. It is interesting that in NHTSA own studies blood shot eyes have been eliminated as a cue of alcohol consumptions. “Bloodshot eyes, while associated with alcohol consumption, also is a trait of many shift workers and people who must work more than one job, as well as those afflicted by allergies.” It is also very obvious that there can be countless other reasons why a DUI suspects eyes might be red and watery. Example: tired, work in front of a computer, swimming, allergies, and might have a cold, recently crying, and many more….
Flushed facial features
Like blood shot eyes, this observation generally occurs in phase two of the Washington DUI investigation. Similar to blood shot eyes, NHTSA research has removed red or flushed facial features from the list of cues. “Finally, some cues were eliminated because they might be indicators more of social class than of alcohol impairment. For example, officers informed us that a flushed or red face might be an indication of a high BAC in some people. However, the cue also is characteristic of agricultural, oil field, and other outside work.”
Smell of Alcohol on breath
Again, this observation can occur in the personal contact phase, but also his reported often in the pre-arrest screening phase. Generally the Washington State Trooper will report the odor of intoxicant on the breath as: none, faint, medium, strong, obvious, or other. Most often I see strong or obvious smell reported.

The alcohol we drink is ethyl alcohol or ethanol (ETOH). Ethonal is the active ingredient beer, wine whiskey, liquors and other hard drinks.  So, if the Trooper or officer is claiming he smelled the odor of intoxicant, he is claiming he smelled C2H6O. Clearly, the trooper cannot smell a chemical compound on the breath, so what he likely smells are the additives in the liquor. What the trooper or officer will not be able to testify is, what the suspect drank, when they drank it and how much they drank. As far as the officers know it could be non-alcoholic beer that he smells. The point is that the smell of “intoxicating liquor” is really irrelevant to a DUI investigation. Furthermore, it is not illegal to have liquor on your breath and drive.
Slurred or mumbled speech
The officer or Trooper will always note how the Washington DUI suspect spoke. Most the time it is described as slurred or mumbled. I’ve seen many times that the officer reports that the suspect’s speech is slurred and mumbled.  I am to this day not sure what the difference is.  A couple of things to note: first, often time the video and audio will drastically contradict the police officers allegation of slurred or mumbled speech. Second, rarely has the officer ever met the suspect before, so how would he know if his normal speech was not slurred or mumbled. Third, it is very normally for people who are nervous to slur, mumble or stutter. If you are anything like me, you get nervous when approached by police.
Washington State patrol has made it very clear that they will be cracking down on DUIs on Memorial Day weekend. They also know that many people will be traveling to Chelan County, so look out for DUI patrols arrests there too. The bottom line is that DUI in Washington State if very dangerous. If you decided to drive drunk you will eventually hurt yourself or someone else. Please enjoy the holiday responsibly.